The menace of drivers using mobile phones has been laid bare by high-tech cameras that can instantly capture motorists calling, texting or scrolling at the wheel.

Figures from the cameras suggest that one in every 200 drivers uses their mobile phone while driving on motorways.

One camera alone identified 15,000 cases over a six-month period where a driver could be seen with their phone in their hands.

Until now police have only able to catch offenders by driving up alongside them.

But the new automated system uses artificial intelligence (AI) software to analyse instantly high-definition photos taken through the windscreen of every passing car.

The smart cameras are being trialled on an undisclosed motorway ahead of a blanket ban on holding a mobile device while driving from early next year.

Acusensus, the Australian firm who designed the cameras, reveal in a brochure that the system ‘addresses all forms of distraction, beyond the illegal use of mobile phones’, including eating, drinking, smoking, adjusting vehicle settings such as the radio, and use of mobile and navigation devices in a holder.

The roadside cameras, which can also catch drivers not wearing a seatbelt, were permanently rolled out on roads in Queensland, Australia, in July 2021. 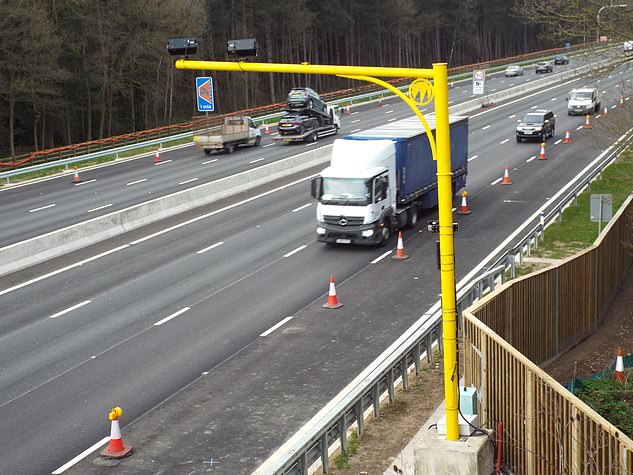 New high-tech cameras can instantly capture motorists calling, texting or scrolling at the wheel, as is pictured above

THE LAW ON EATING, DRINKING, SMOKING, SEATBELTS, AND USING PHONES

It is illegal to text or make a phone call (other than in an emergency) using a hand-held device while driving.

As of 2022, laws will go further to ban drivers from using their phones to take photos or videos, scroll through playlists or play games.

This will mean anyone caught using their hand-held device while driving will face a £200 fixed penalty notice and 6 points on their licence.

Drivers will still be able to continue using a device ‘hands-free’ while driving, such as a sat-nav, if it’s secured in a cradle. They must, however, always take responsibility for their driving and can be charged with an offence if the police find them not to be in proper control of their vehicle.

Laws had previously banned motorists from using their phones for communication purposes, but rules have since been updated to ban the holding of phones for any reason.

It is only legal to use a mobile phone if you are safely parked – which does not include waiting in traffic or while stationary at traffic lights.

In emergencies, you are allowed to make 999 or 112 calls while driving, but only if it is not otherwise safe to stop.

The penalty for being caught using a mobile phone is a Fixed Penalty Notice of £200, and six penalty points on your licence.

It is not illegal to eat while driving, but if a driver becomes distracted and is not in proper control of the vehicle then police could prosecute for careless driving – meaning an on-the-spot fine of £100 and three penalty points.

Like eating, it is not illegal to drink while behind the wheel, but it could carry the same careless driving penalty if motorists become distracted.

Smoking is also not illegal, but again, if it causes distraction behind the wheel, it could mean a charge of careless driving.

However, travelling with passengers aged under 18 and smoking in the car is illegal, following changes to the law made in 2015.

Drivers must wear a seat belt if one is fitted in the seat they are using.

A few exceptions apply, including drivers who are reversing, driving a goods vehicle on deliveries travelling no more than 50 metres per stops, or a licensed taxi ‘plying for hire’ or carrying passengers.

A doctor may say a driver does not have to wear a seat belt for a medical reason, handing out a ‘Certificate of Exemption from Compulsory Seat Belt Wearing’

Motorists are only allowed one person in each seat fitted with a seat belt, and can be fined up to £500 if they do not wear a seat belt when supposed to.

It is a fresh victory for the Daily Mail’s End The Mobile Madness campaign, which has led calls for tougher penalties.

Jenoptik, the enforcement technology firm testing the cameras in the UK, believes they will be crucial in providing evidence to prosecute offenders.

The pilot scheme has been running since spring and it is hoped a wider rollout across the country will be possible next year.

The 15,000 figure is likely to be far higher as the trial was not always capturing data and did not monitor all lanes.

‘However, it does still relate to a significant number every day, which is quite scary,’ said Geoff Collins, of Jenoptik.

‘Current findings suggest one in 200 vehicles show mobile phone misuse. This is a worryingly high figure.’

Those identified have not been penalised as the trial is a ‘proof of concept’ and will need legislative change for it to be enforced.

The cameras – which can be fixed to overhead gantries or fitted in portable trailers – use very high shutter speeds to take pictures through the windscreens of each passing vehicle.

High-definition images are produced in any weather and at speeds of up to 185mph without any motion blur.

Sophisticated software sifts through each image in real time and flags anyone deemed to be breaking the law to a team of human moderators to review.

If use of the cameras is approved by law, the images would be sent to police and notices of intended prosecution posted to the vehicle’s owner in the same way as speeding penalties.

The technology is already used in New South Wales, Australia, where it is estimated to have reduced road fatalities by a fifth since it was introduced two years ago.

The offending rate had fallen from one in 82 drivers during the pilot period in 2019 to one in 478 by the end of October this year.

In November the UK Government announced that motorists would be banned from picking up their mobiles for any reason while driving from next year.

Offenders will face a fine of up to £200 and six points on their licence. It is designed to close a loophole in the current law that means drivers can be prosecuted only if they are caught using hand-held phones to call or text.

Mr Collins said there had been a ‘high level of interest’ in the cameras – designed by the Australian firm Acusensus – from highway authorities and police forces.

One in four drivers admitted using a phone in their hand while driving at least once in the past 12 months, according to a survey by the Department for Transport.

If a driver looks at their phone for two seconds while travelling at 30mph, they will travel 100ft blind.

‘Using a handheld mobile phone significantly increases the risk that a driver will be involved in a collision,’ Mr Collins said.

‘But until now it has been difficult to monitor and stop this behaviour. These trials have proved that AI can flag up drivers who continue to flout the rules.’ 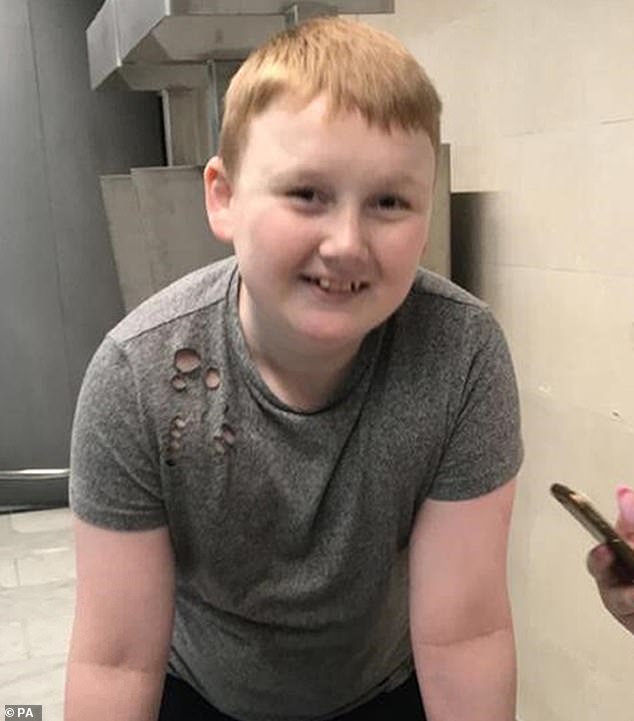 Joe Cairns, 14, who along with school support worker Anne Kerr died in a crash caused by an HGV driver on their mobile phone in 2019 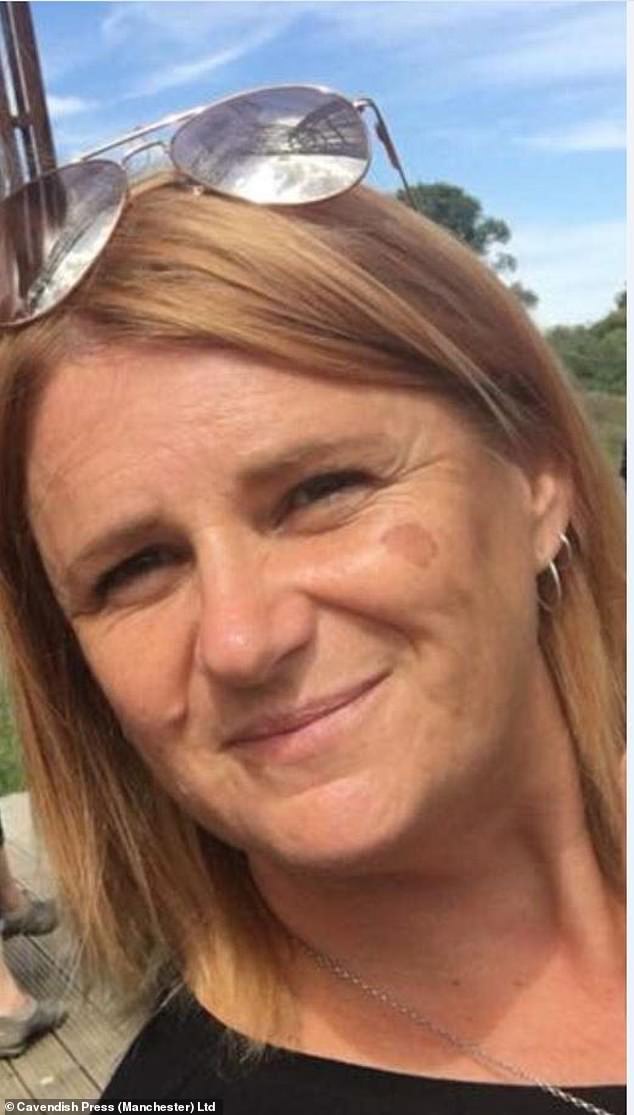 Ms Kerr, a teaching assistant, was killed in the crash on the  M58 close to junction 3 at Bickerstaffe in January 2019 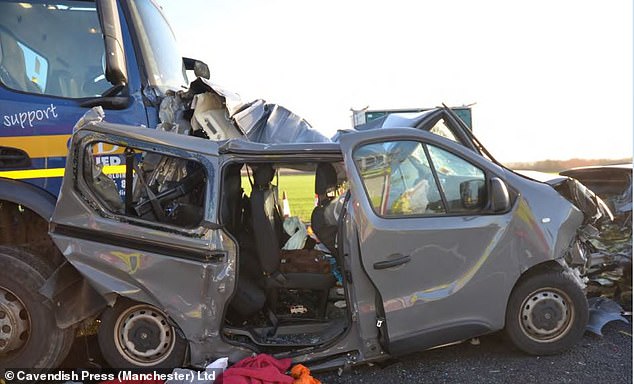 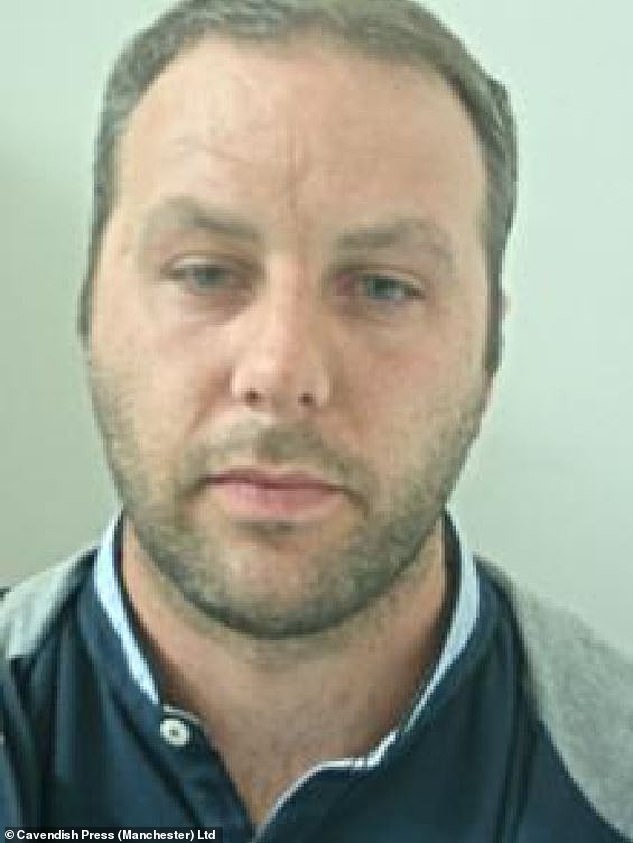 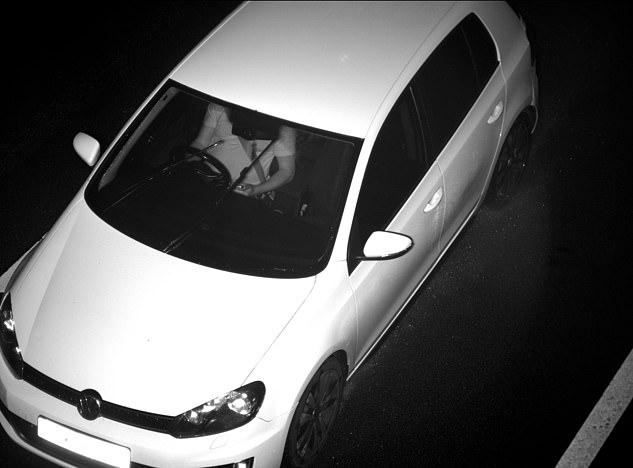 A lorry driver was checking Facebook on his mobile when he hit a special needs school minibus, killing a pupil and a support worker.

Joe Cairns, 14, and Anne Kerr, 50, died and five others were injured when 34-year-old James Majury’s dangerous driving caused a multi-vehicle pile-up on the M58 in Lancashire in January 2019.

Preston Crown Court heard he had been texting, viewing sports news, using social media and playing a mobile game during his journey. He was jailed for almost nine years.