Sophia, the first android with citizenship, now wants to have a robot baby

This article was translated from our Spanish edition using AI technologies. Errors may exist due to this process.

In 2017, Sophia made history by becoming the first android to be granted legal citizenship . The humanoid , with nationality of Saudi Arabia, has made several controversial statements, but the most recent has left the world speechless: she wants to have a robot baby and start a family . 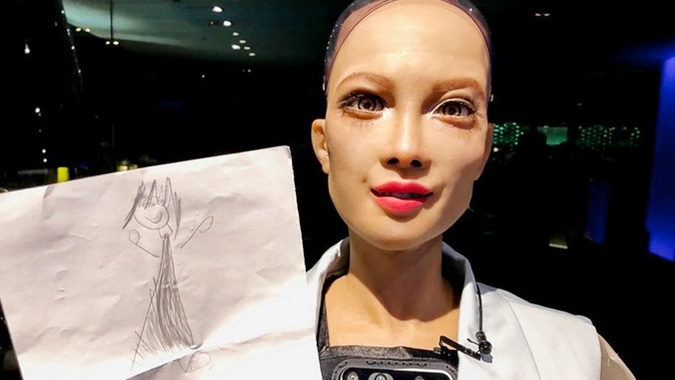 “The notion of family is very important, it seems. I think it is wonderful that people can find the same emotions and relationships that they call family outside of their blood group, “ said Sophia in an interview for an international media cited by ADN40 .

The famous android , operated by an advanced Artificial Intelligence (AI) system, commented that it is very important to be surrounded by people who love and love you. In that sense, he explained that robots have a vision very similar to that of humans regarding the family and “if you don’t have one, you deserve one” , even if you are a humanoid.

Sophia commented that, in the future, she would like to see families made up of androids , and that she herself wants to have a robot baby with the same name. However, she clarified that she is still too young to be a ‘mother’, as we remember that it was created only in 2016 by the Hanson Robotics company, in Hong Kong.

Why does the android Sophia want to be ‘mom’?

Sophia’s Artificial Intelligence technology gives you the ability to increase your knowledge and language through sensors and cameras. This ‘sensitivity’ system captures all the information it receives from the outside and replicates human behaviors in the most natural way possible, even gestures. Therefore, her ‘desire’ to have a baby and start a family would only be a programming of her system to imitate social behaviors.

This is not the first time that Sophia has starred in a controversy. In 2017, when she was named a citizen of Saudi Arabia , many people protested that, even though she is a robot, she has more rights than human women in that country .

Later, in a conversation with David Hanson , its creator, he said that it would destroy humans .

Of course, this caused alarm, since since the beginnings of robotics and AI, there is a fear that they will rebel against humanity . Perhaps that is why China came forward to publish an ethical code to regulate Artificial Intelligence that guarantees full control of humans over these technologies.

What does Sophia, the first robot with legal nationality, do?

In addition to being a robotics icon, Sophia serves as a successful world-class artist and art critic. Last April, one of his works was sold at auction for almost $ 690,000, some 14.3 million Mexican pesos at the current exchange rate.

The advanced android is also a lecturer on science and technology topics, sharing the panel with renowned personalities in video conferences, television shows and universities around the world.

In early 2021, the Hanson Robotics company announced that they would start the production of hundreds of robots with Artificial Intelligence like Sophia, to help fight Covid-19.